Secret Keepers Series is the romantic, teen, fantasy and fiction novel which includes the four mind-blowing books to read for her fans. Jaymin Eve is the author of this outstanding series of novellas. “House of Darken” tells the adventure of Emma, she is moving from her motherland to Astoria for further studies. While moving there she must fallow two rules while living there. Did not go behind the side of a street and don’t mess with the elites families and especially with Lexen Darken. He is a real bad guy and the top elite of the society. One day she crosses the street and surrounded by Lexen and his brothers. “House of Imperial” is the second book which tells the story of teenage girl Callie. Callie got the superstition powers which are hidden from the rest of the world. 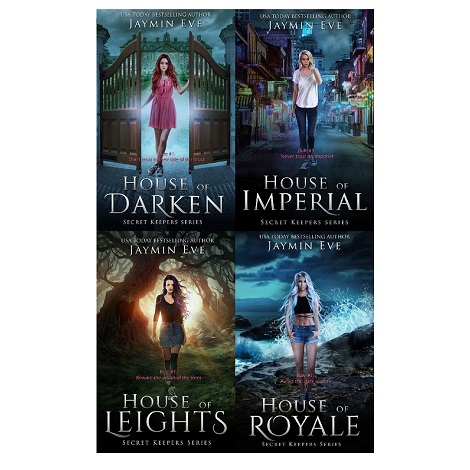 She lives with her paranoid mother and moves to a different place every four months. Callie knows, she cannot lives the normal life but she wanted to live an ordinary life. “House of Leigths” is about Maya, she does not have any kind of difficulty in her life so she can complain of her parents. Her parents are so busy in the government jobs and did not manage to give her proper time. Soon, she befriended by a mysterious guy and her life change upside down. “House of Royale” is the last in the series and fantastic to read. Avalon is a kind of girl who loves to spend her time alone. She is an introvert girl who builds her dreams under the sea. There is a guy from her class who regularly notices her, his name is Xander and he might change her life.